This past weekend, Neal and I were very excited to be able to have a gender reveal with a few local friends here in Evansville.  We've already told our families either in person or via Skype the gender of Baby Bratton.  I also told some of my Knoxville/Middle TN friends the news because I knew they couldn't come to the reveal and we had to wait over a week to have that, and me waiting to tell everyone just wasn't an option. I am, of course, just ecstatic about the little one!
Our Gender Reveal Party

Neal and I invited a handful of the friends that we have here in Evansville over to our house on Saturday. We knew it would be a small crowd since it was the day before Easter, but were so happy to have the friends that were able to come over to celebrate!!!
I prepped on Friday, making some drinks and cutting up fruit for fruit pizza.  I made strawberry lemonade and blue raspberry lemonade.  I totally went un-healthy with a lot of my food preparation and went the easier route of getting powders to make my drinks and then just added fresh cut fruit to the drinks.  Typically I'm one who would want to squeeze lemons and puree strawberries to make a delicious drink, but I knew I just needed to give myself a break and take it easy. 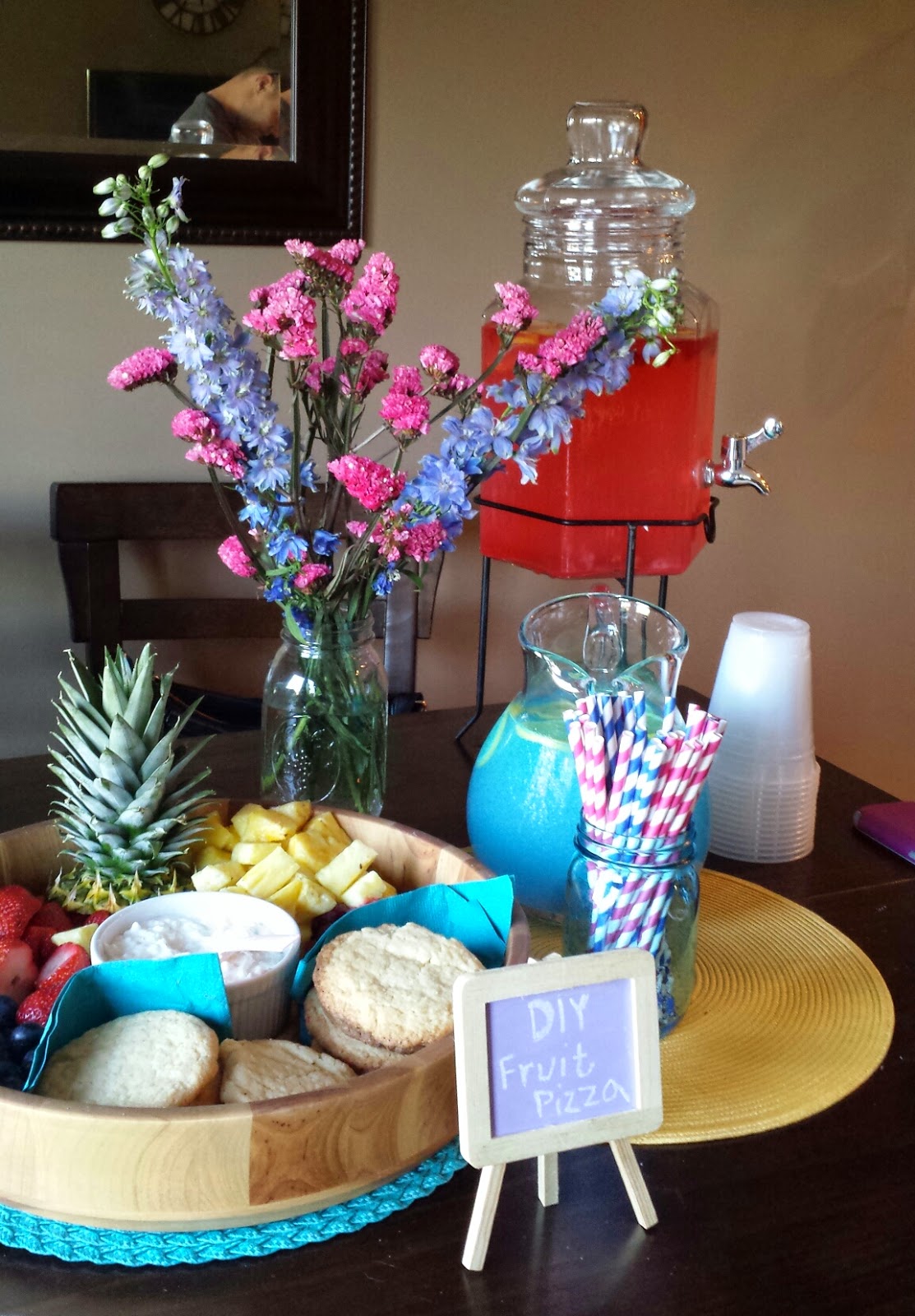 You can see the blue and pink-ish drinks I made behind the pink and blue striped straws I picked up for $1.99 at Michaels!  I have the little chalkboard signs from some Lively Happenings craft shows.  The dip for the fruit pizzas is simply plain Greek Yogurt, a little sugar, and coconut flakes...yum!!! I cut all the fruit myself (including that cute pineapple) to save on money - hello a whole pineapple for 98 cents at Aldi!

In keeping with the easy prep, on Saturday morning, I made brownies and cookies, both from packages.  I simply added some pink M&M's to some of the chocolate chip oatmeal cookies and some blue M&M along with nuts to the other half of that same cookie dough.  I also baked the brownies in the same pan, simply stirring in nuts to 1/2 of the batter right before putting it into the oven.  I wanted to make this as simple as possible.  It's not my normal, I REALLY LOVE baking from scratch, but I just knew I needed to not make a big fuss and let it be. 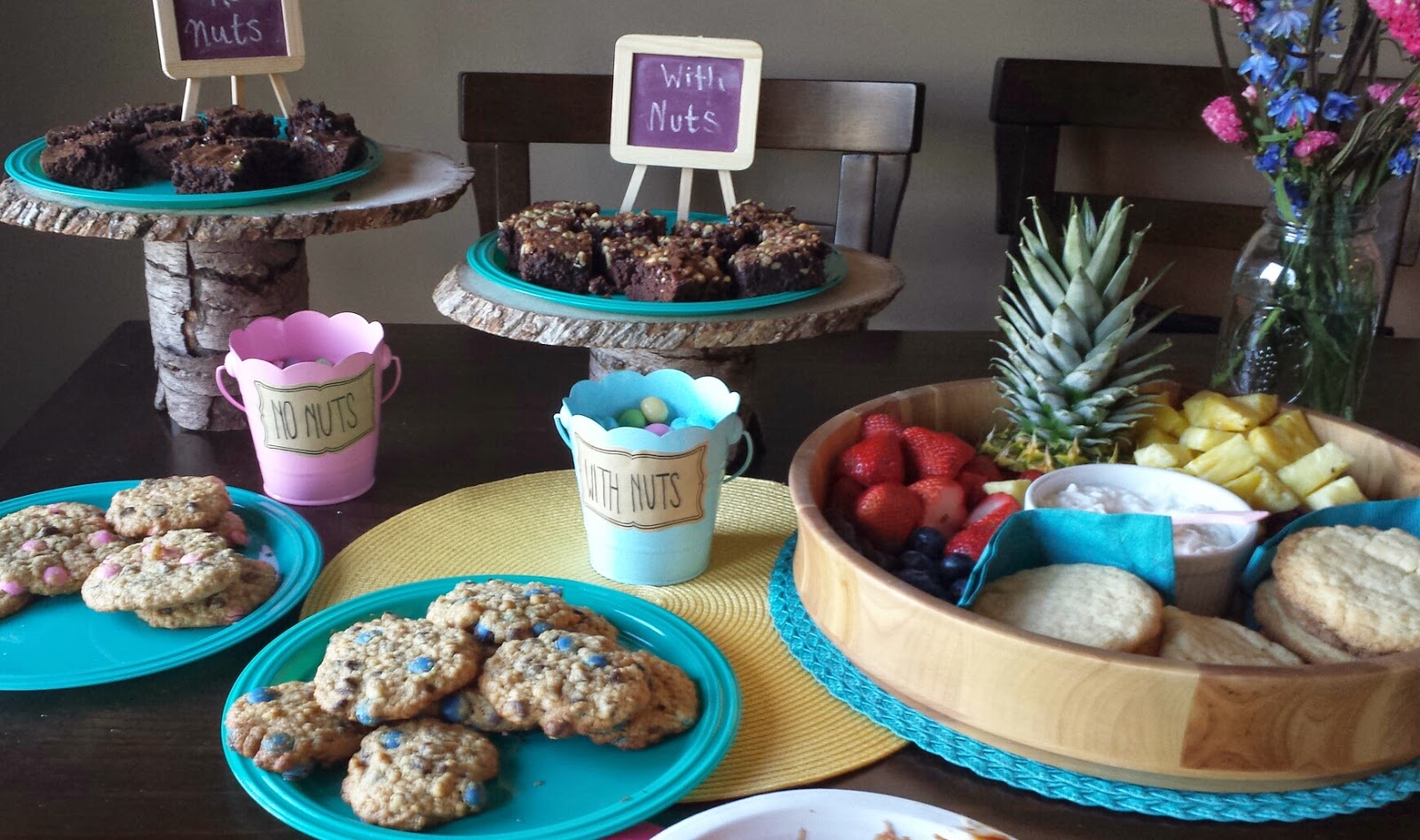 I also got peanut M&M's and pain M&M's on sale and put them in a blue and a pink container I found in the dollar section at Target (score! I love that section!).  If you haven't caught on yet...I was going with a Blue or Pink theme of "With Nuts" or "No Nuts"...Get it?  (Look again above to see... :) !

I had the onesies I made pinned to one of my shutter boards (best $10 I even spent at Goodwill was on these!) and along side them I had a few ultrasound pictures and stickers so guests could vote their gender! 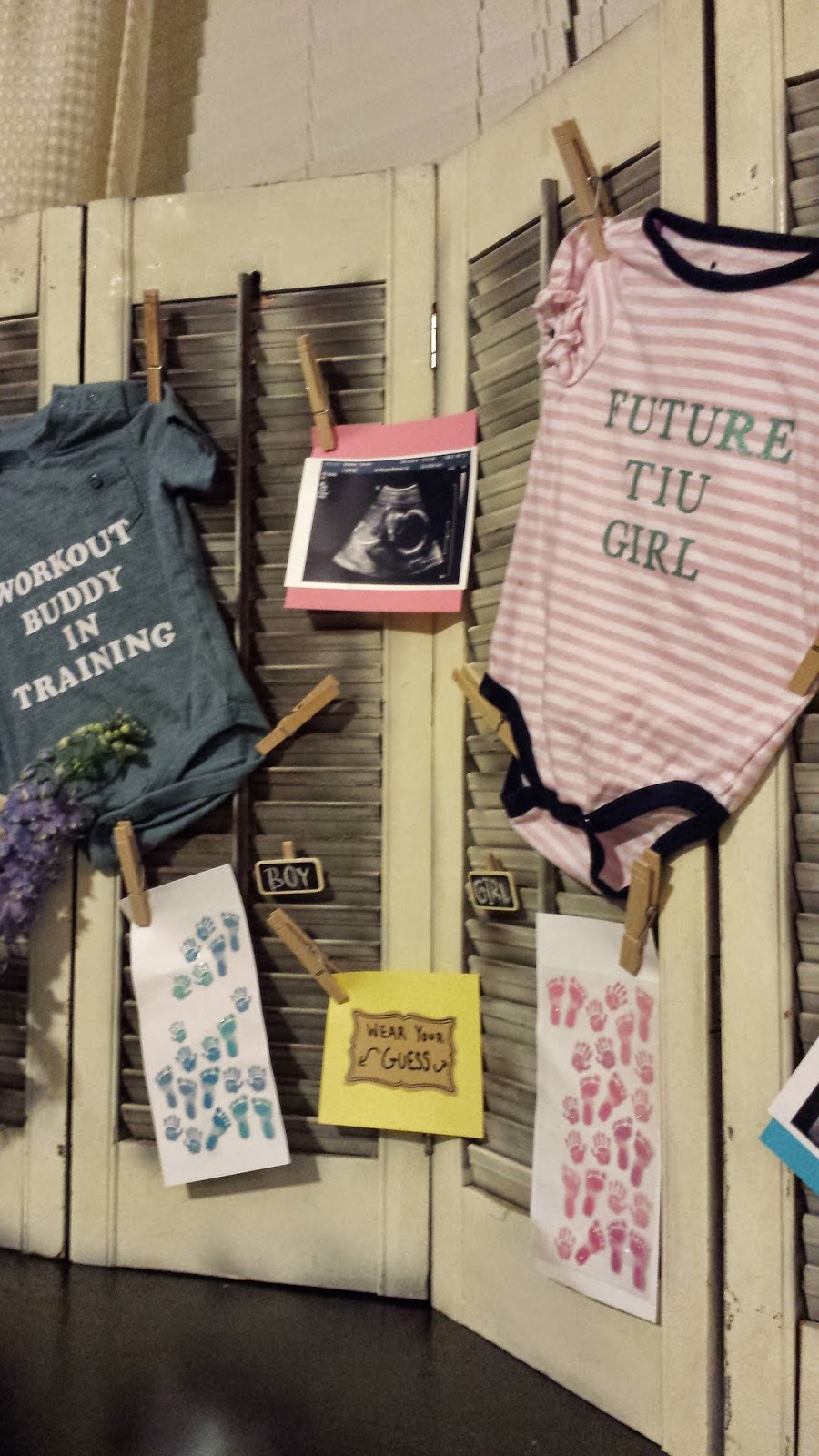 Neal and I picked up some pulled pork, smoked sausage, potato salad, and coleslaw as additional food.  We pulled out our Ladder and String game (Red Neck Golf) and the kids that attended enjoyed playing that while we chatted with our friends.

For our reveal, I wanted to do something different, so of course I searched Pinterest and the internet for ideas.  I thought about doing the cake, or the box of balloons, or even getting a piniata to fill with blue or pink candy, but finally I found my plan when I saw a silly string reveal and I LOVED IT!

I knew we weren't going to have many guests, so I bought a modest 6 cans of stilly string.  That stuff is not cheap! I spent almost $3 a can!  It was so worth it though!  I covered the cans with light yellow paper, a little ribbon and the words "Boy or Girl?"  I loved the signage I came up with to go along, "Shake or spray to know baby's gender today!"  Yes, I totally felt clever! 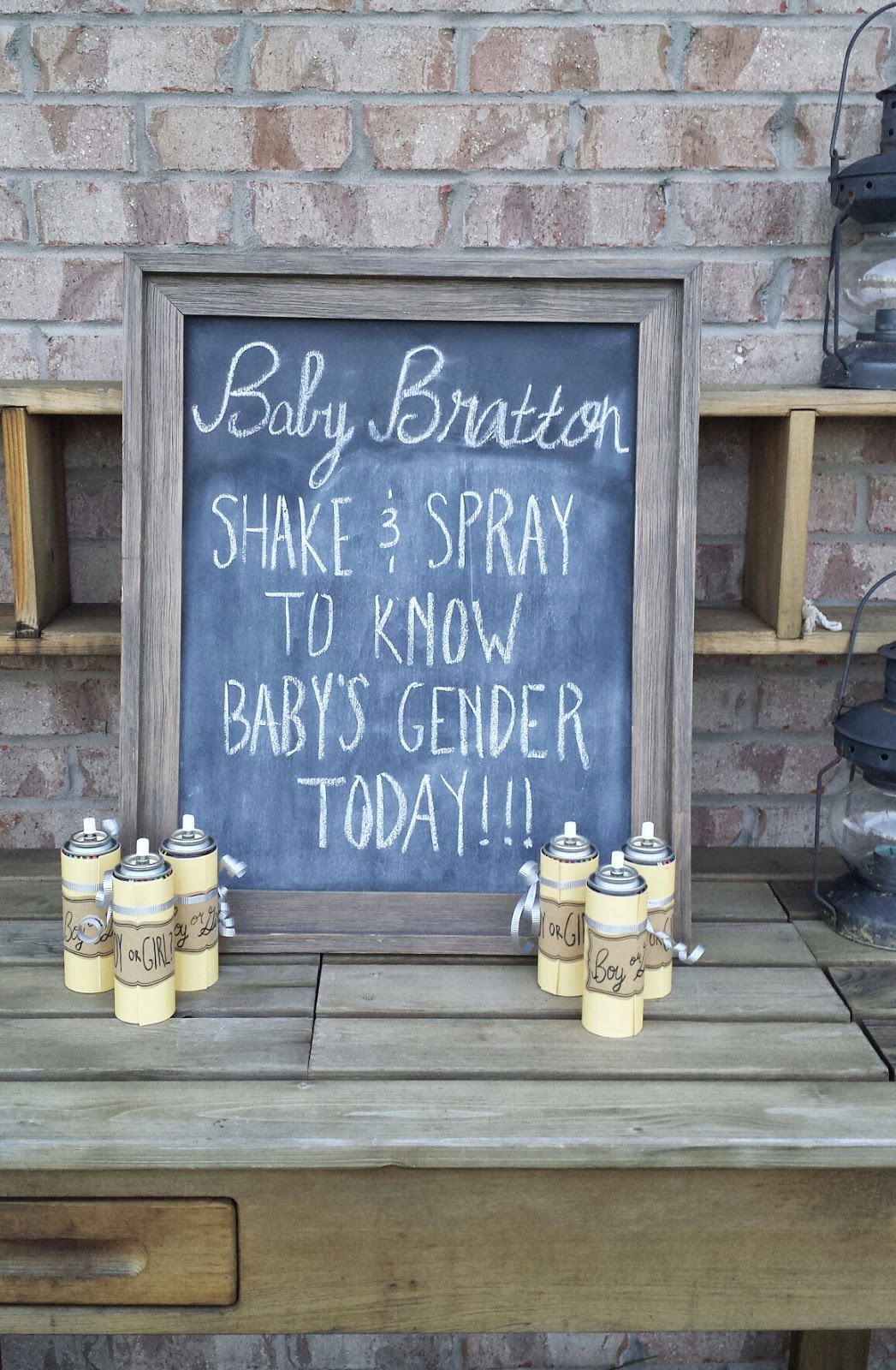 Since we knew the gender, we let our friends take the cans and them spray! Almost everyone had guessed it was a boy, but low and behold, lots of pink silly string came out of the cans!!! 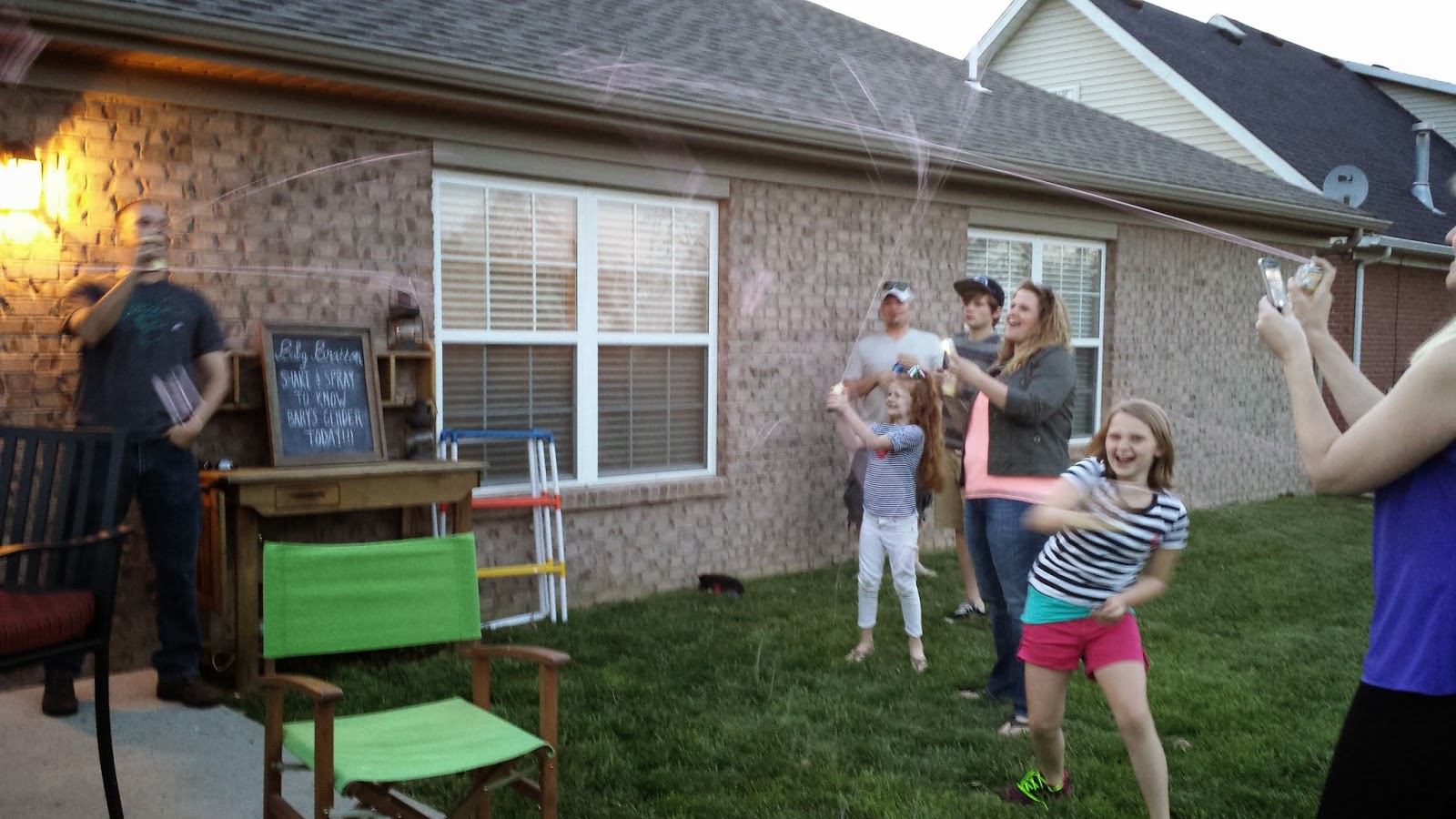 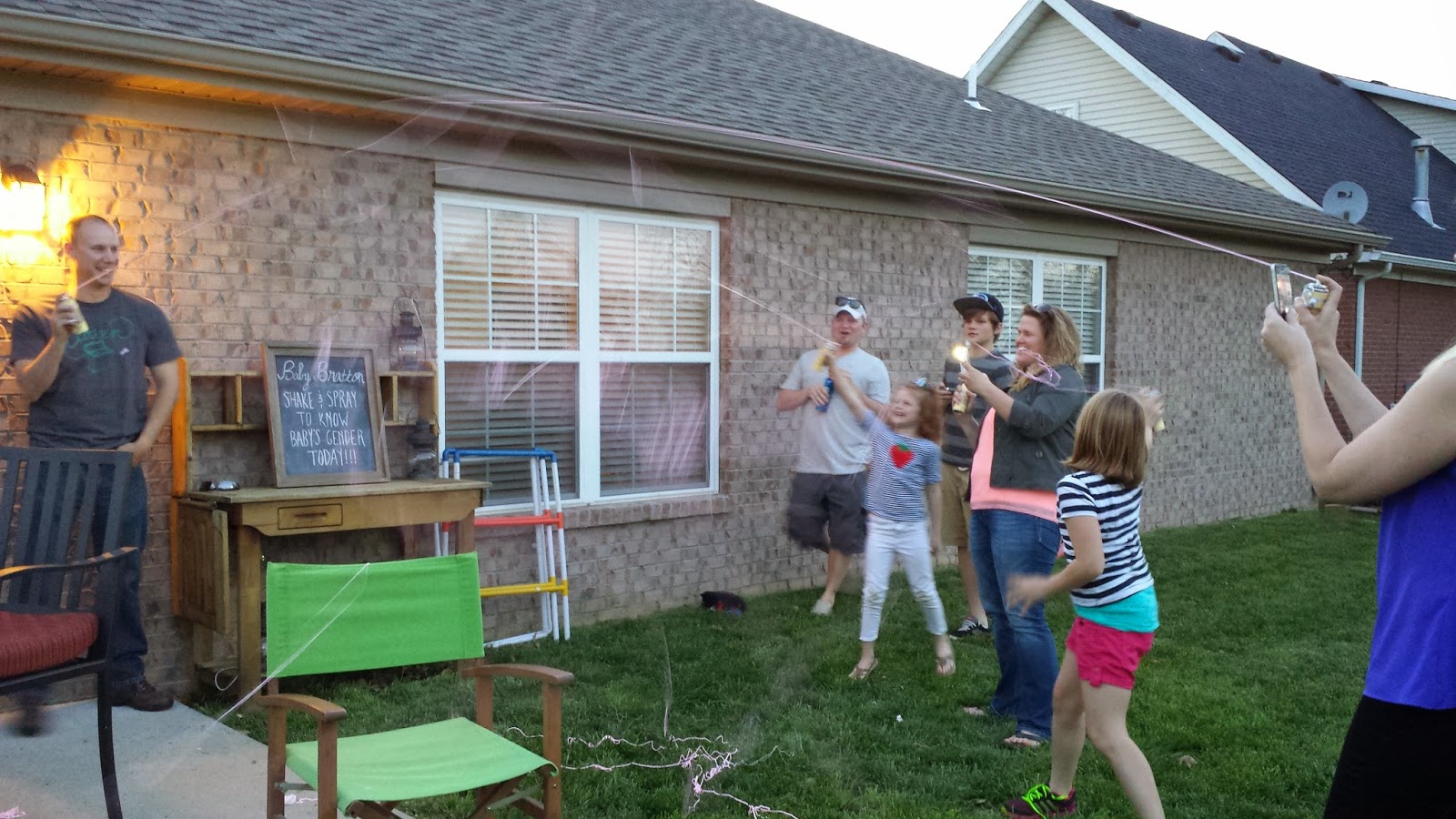 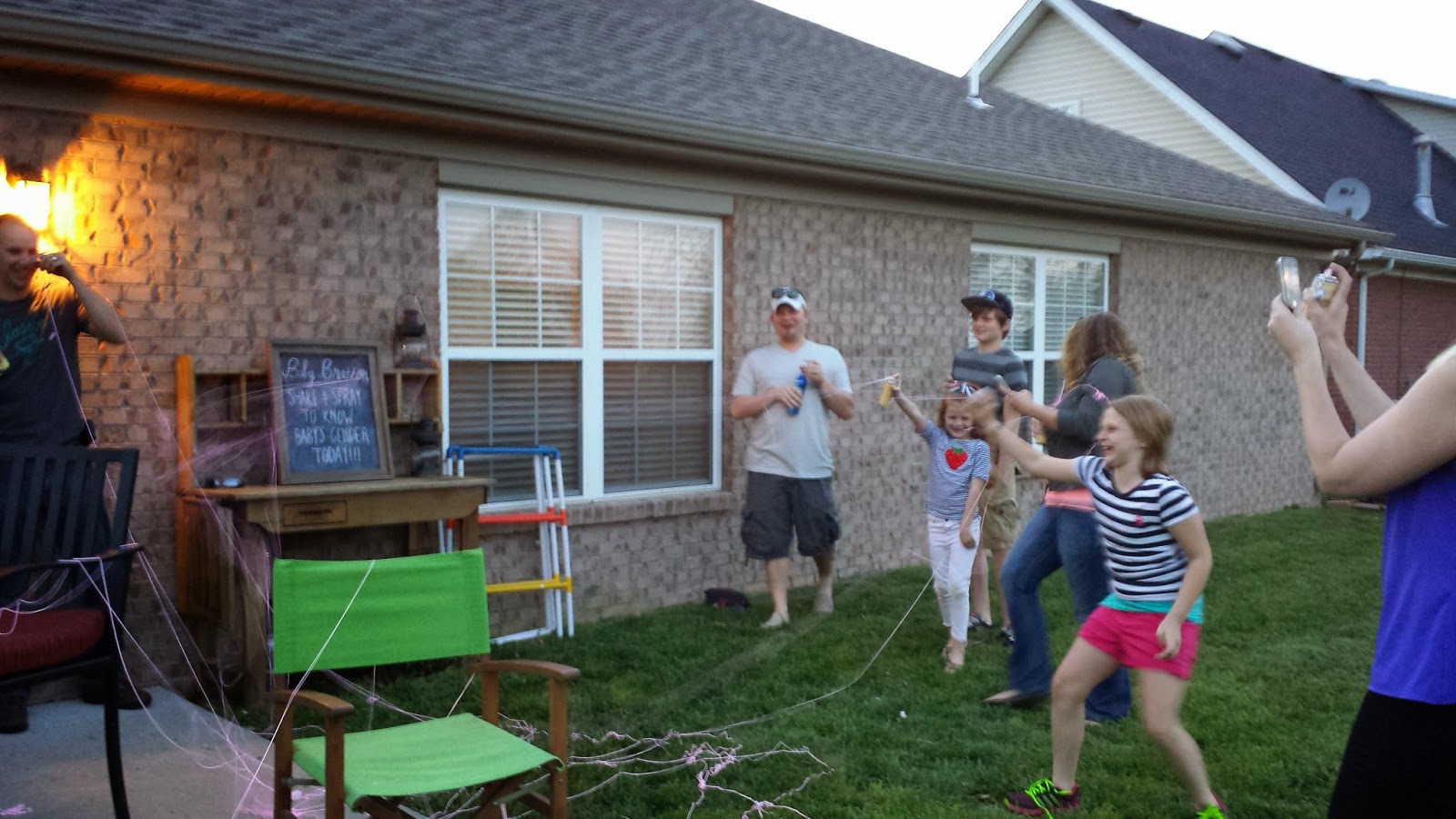 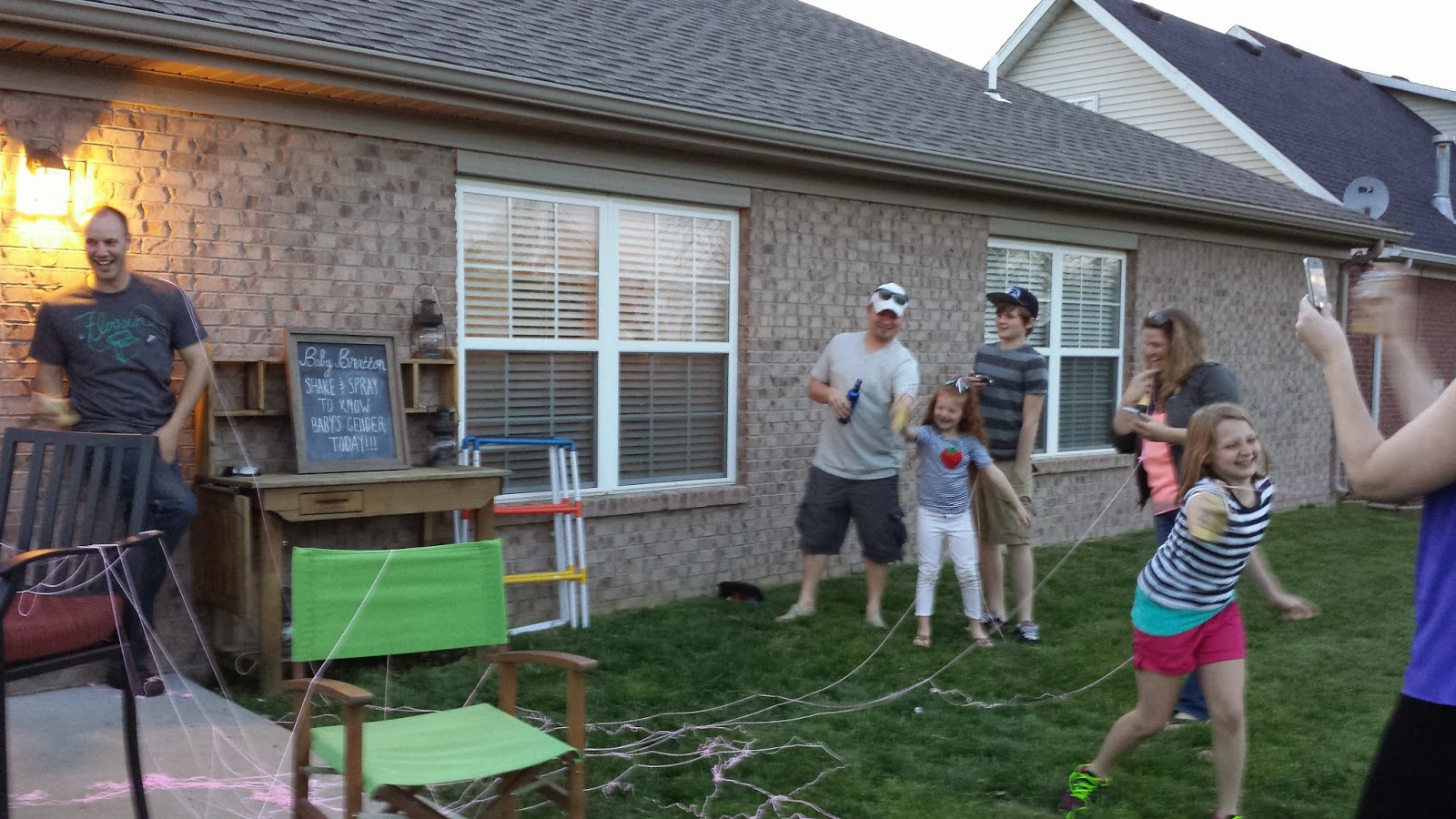 We had Heather and Sarah take a few shots of us after the reveal as well...I can't help it, I love photos! 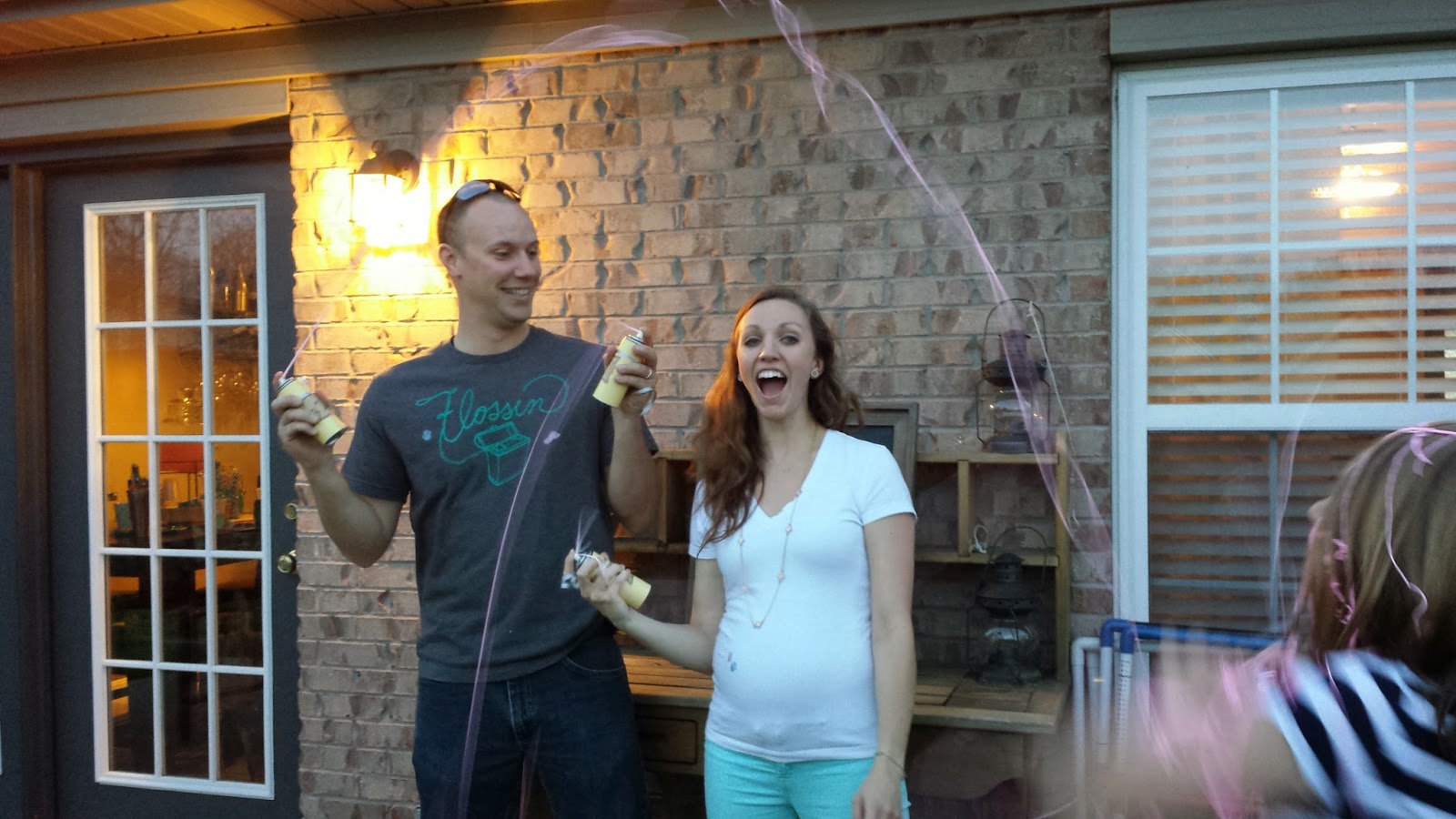 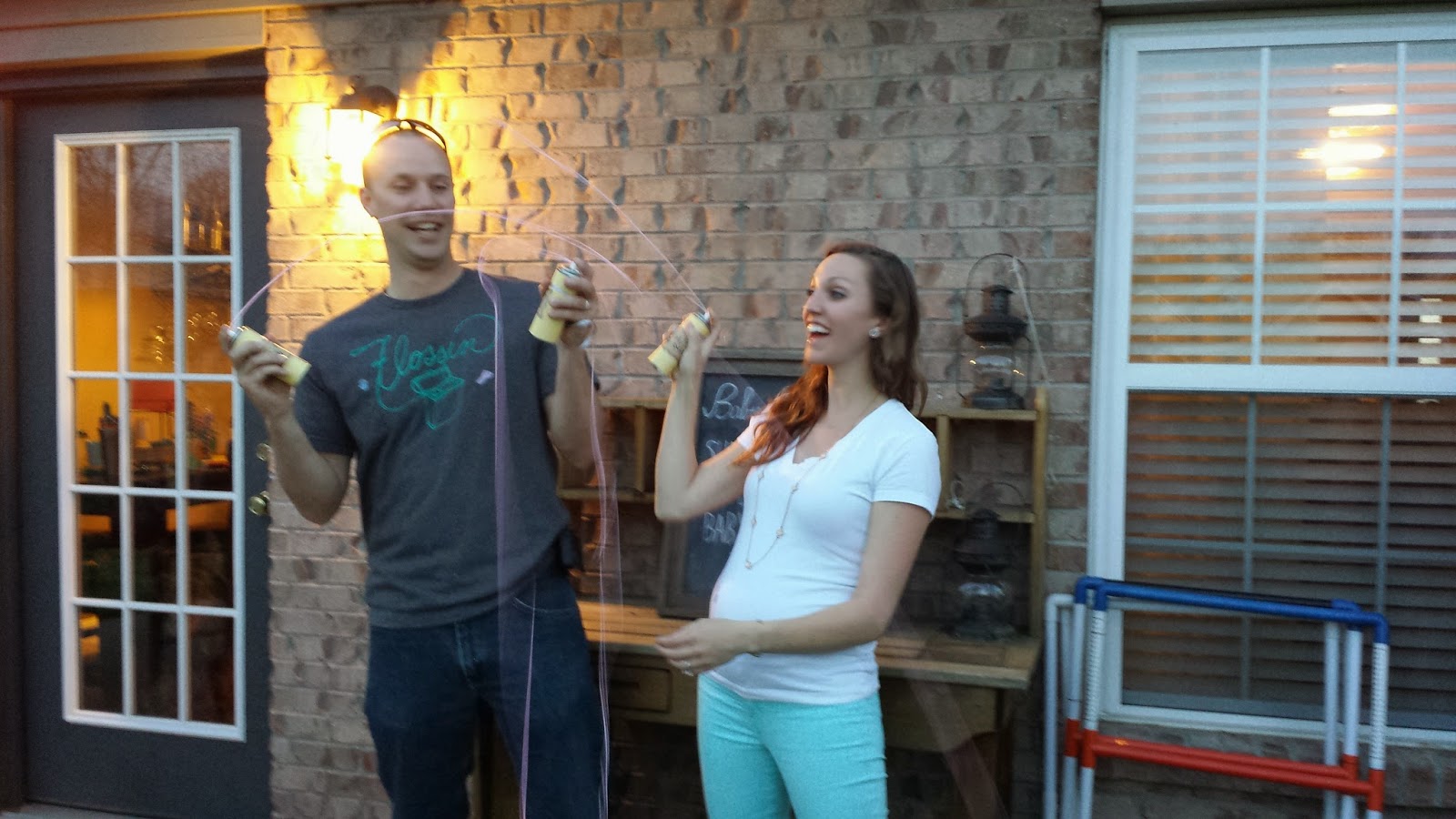 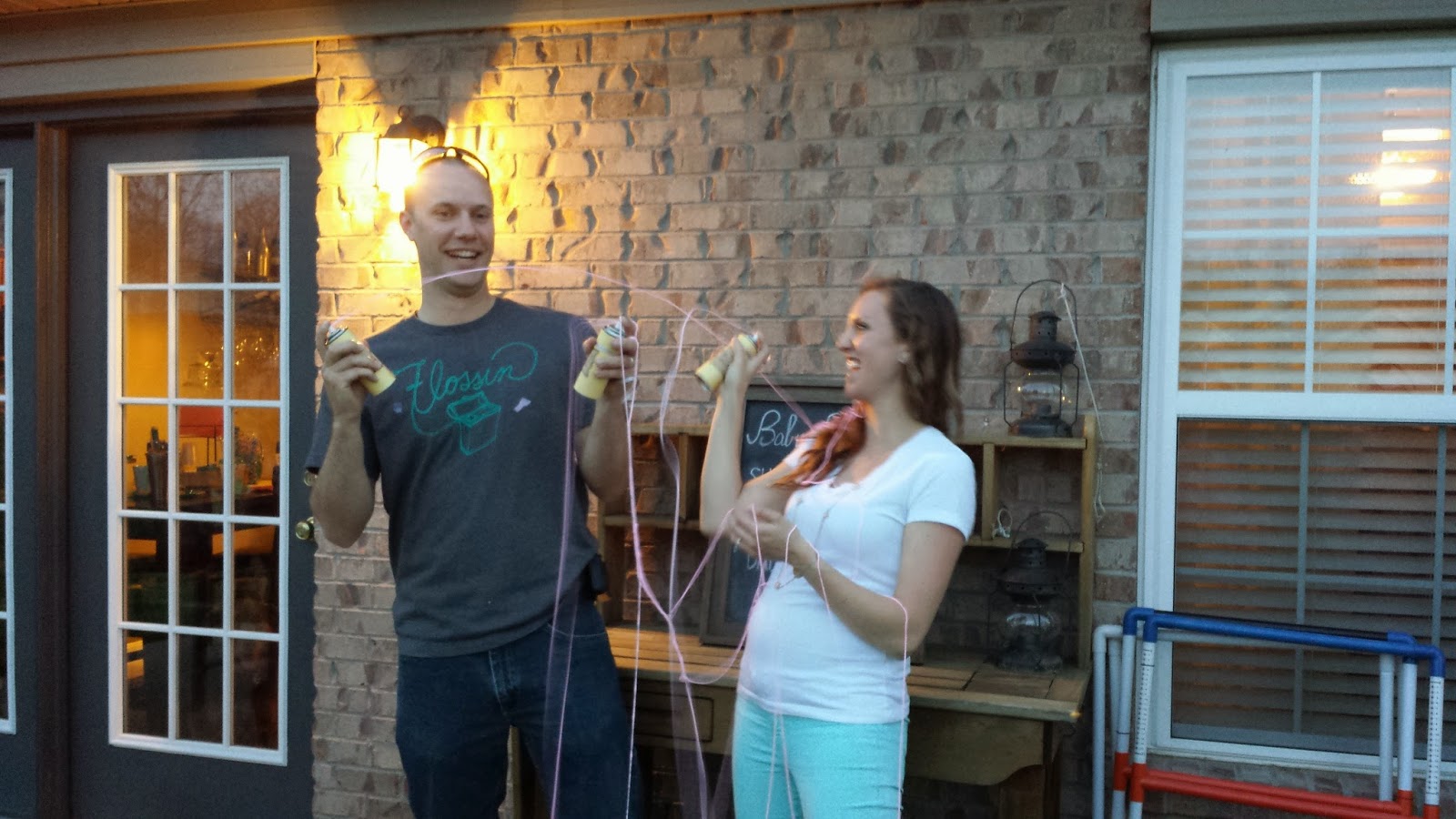 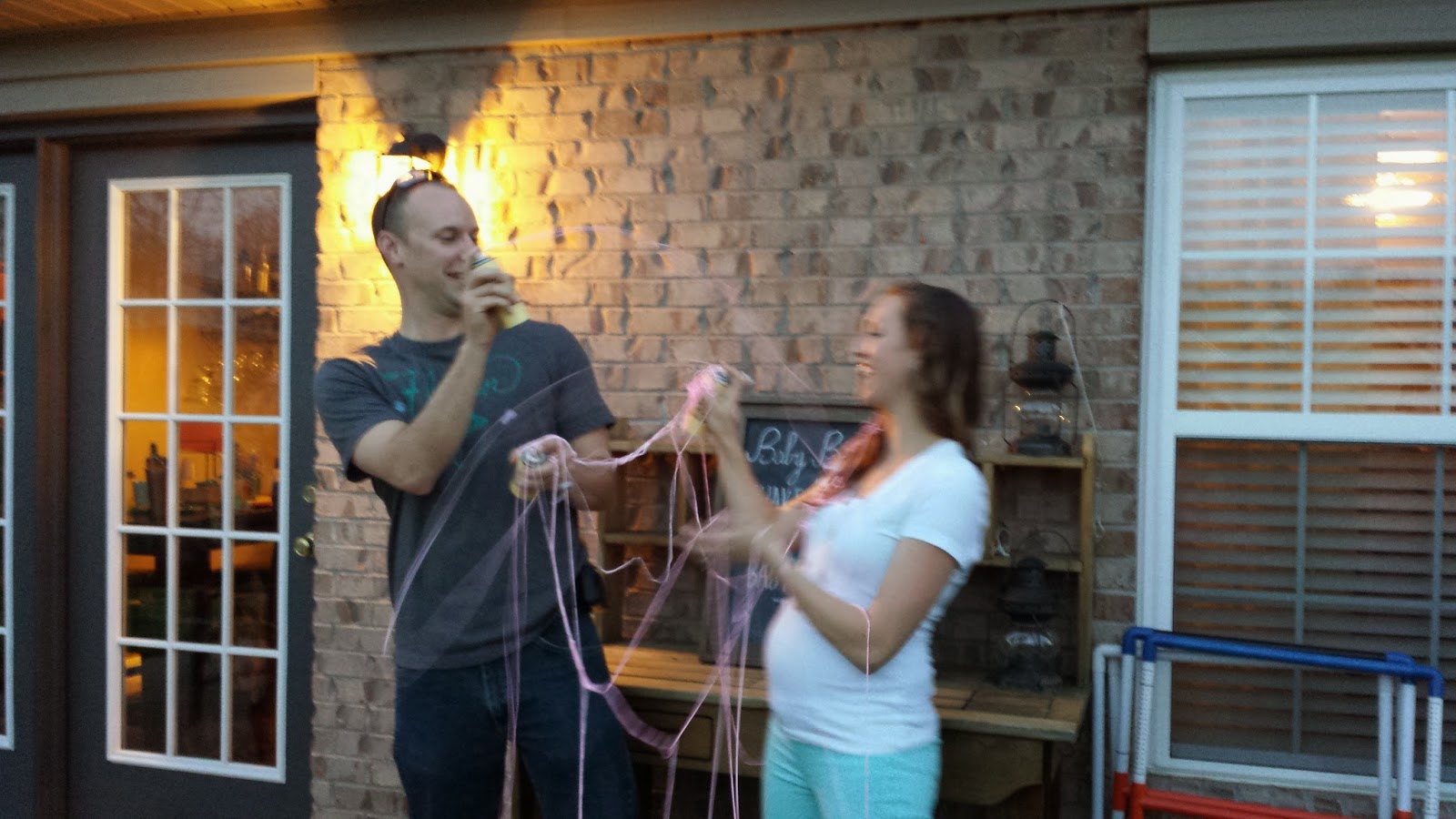 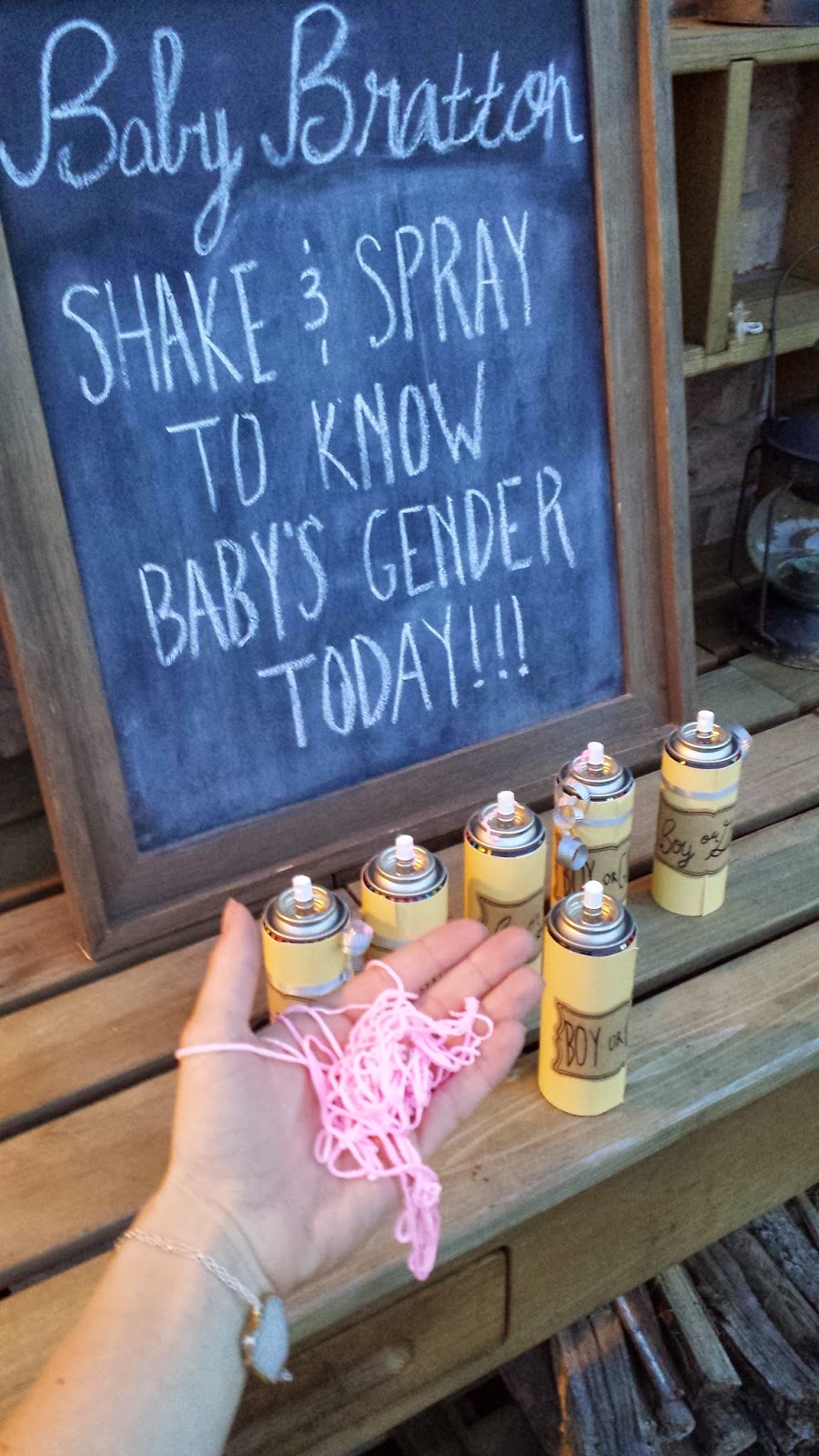 Neal and I are SO excited to be having a little girl!

Here's a snapshot of us right after we had found out 8 days before, that Baby Bratton is going to be a little girl!  I think it's funny because, in my opinion, Neal looks slightly terrified!  I had TOTALLY though she was a boy and had pretty well convinced Neal the same. 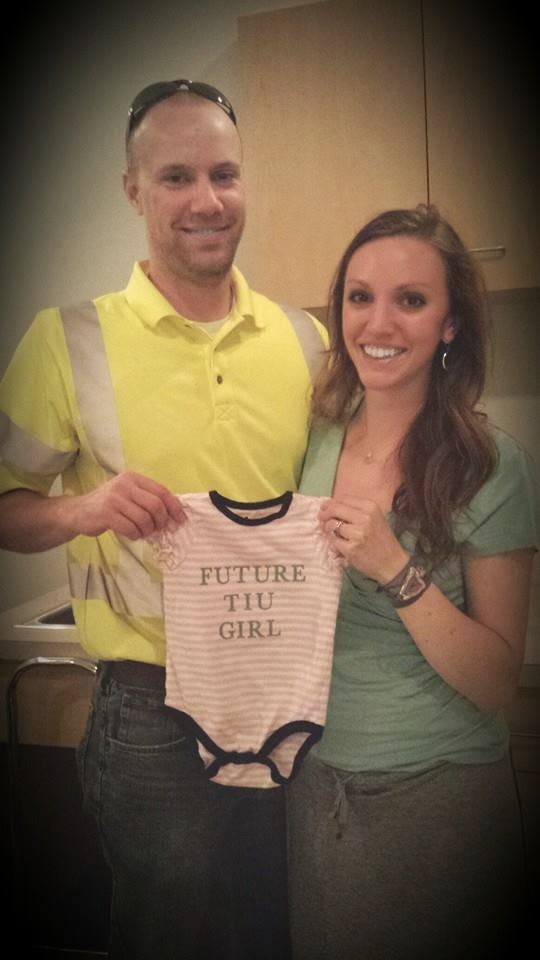 When we had our ultrasound, she was be modest and covering her bits, so much that it took about 20 MORE minutes AFTER doing all the other anatomy checks for them to 99% determine she is in fact a girl!

I hope you enjoyed our little gender reveal!  Thanks for stopping by Lively Happenings blog today!!!

Have you ever been to a gender reveal?  Do you plan to have one if you are pregnant?
Posted by Tamara Lee at 3:57 PM

Other Social Media I'm On!